The accuracy of a Bible translation is important.

1 “Every commandment I command you today you must be careful to do, that you may live and multiply, and go in and inherit the land the Lord swore to your fathers. 2 Now you shall remember the whole way the Lord your God led you in the desert, to deal harshly with you and test you, to know what was in your heart, whether you would keep His commandments or not. 3 So He dealt harshly with you and weakened you with hunger, and fed you with manna, which your fathers did not know, that He might make you know that man shall not live by bread alone, but by every word proceeding from the mouth of God man shall live. 4 Your garments did not wear out on you, nor did your feet become callused these forty years. 5 You should know in your heart that as a man chastens his son, so the Lord your God chastens you. 6 Therefore, you shall keep the commandments of the Lord your God to walk in His ways and to fear Him.
(Deuteronomy 8:1-6 OSB)

Jesus quoted this truth in His rebuke of Satan's temptation in the wilderness:

1 Jesus, full of the Holy Spirit, left the Jordan and was led by the Spirit into the wilderness, 2 where for forty days he was tempted by the devil. He ate nothing during those days, and at the end of them he was hungry.

3 The devil said to him, “If you are the Son of God, tell this stone to become bread.”

Since man lives by every word that GOD gave, then that makes every word GOD gave important. And that means correctly and accurately receiving (and understanding) every word is important.

In the United States, there is a silly game called Telephone. Perhaps you've heard of it.

In this game, people form a queue (in a line or circle). The first person whispers a message into the next person's ear so that only that individual can hear the message. Person 2 repeats the message to person 3, and so on.

When the last person receives the message, they share the message they heard aloud for the group.

Often, the message shared aloud at the end is entirely different from what the first person made up. Everyone has a good laugh at how badly the message was miscommunicated.

And yet, everyone recognizes that Telephone imitates life. The more intermediaries there are between the source of the message and the sharer of the message, the more likely it is for there to be miscommunications—often wild differences.

So it is with Bible translations.

Consider the flow of how GOD's word makes its way to us:

Since we are to live by every word of GOD, we should care deeply about how accurately the above steps are preserved between step 1 to step 5.

I do not know Greek or Hebrew. But I do know that each language has nuances and concepts that do not translate cleanly to another specific language. Additionally, the flow of one language, such as sentence structure, can make reconstructing statements into another language difficult when that second language's structure is different.

To illustrate, consider the above verse from Deuteronomy 8:3. This is how the Septuagint (LXX) structure literally aligns with English: 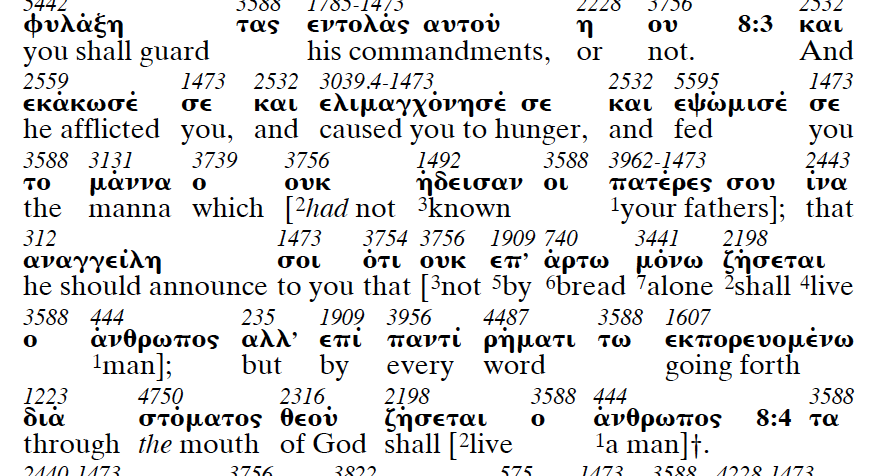 Note the brackets towards the middle of the image. The English phrase "man shall not live by bread alone" in the Greek is structured as "not by bread alone shall live man."

While an English reader can perhaps eventually determine the intended meaning, it's, at minimum, a mental strain. Imagine reading a full chapter containing these structural differences, especially without the handy brackets that alert us to each such occurrence.

These issues present a quandary for translators:

English Bible translations span the gamut between these extremes. For example, Young's Literal Translation prioritizes accuracy and can be difficult to read at times. The Message is on the other end of the spectrum, paraphrasing the Scriptures into a highly readable format that strays far from a word-for-word translation.

But even these strategies suffer from a critical underlying assumption ...

Most English Bible versions translate the Old Testament from the Hebrew Masoretic Text (MT) source text, as discussed in the previous principle.

There are three big problems with this:

The fact is that the Hebrew Masoretic Text is an inferior translation of the Old Testament.

By contrast, the Septuagint dates back to the 200s B.C., with extant fragments as old as the 300s A.D., was the standard for the Christians of the first few centuries, and was heavily used by the Jews in the first century.

Most importantly, the Old Testament quotations in New Testament texts read virtually word-for-word the same about 95% of the time. (That's much better than the Masoretic Text's 50%!)

While it is true that a Bible student can understand the most important themes of the Bible without the Septuagint, remember ... man shall live by "every word" that proceeds from GOD.

I became aware of these truths in 2018 and, over time, as I saw more evidence, I increased my usage of the Septuagint to the point that I never use the Hebrew Masoretic Text as my primary source any longer. I only use the MT to compare against the Septuagint.

In the years since, I have repeatedly been astonished at the realization that certain biblical concepts are apparent and obvious in the Septuagint, but far less so in the MT. Examples include the nature of Jesus' church, the existence of the gods of the Gentile nations, and how the second world was ruled by angels. The message of Proverbs is far more spiritually-focused. Job reads quite differently (and we learn more about his background).

If you learn nothing more from me, get a Septuagint Old Testament-sourced Bible and use it as your primary Bible. I recommend the Orthodox Study Bible (OSB), though I dislike the inclusion of human commentary in a Bible, and the Apostolic Polyglot for in-depth study. (The Apostolic Polyglot is where I took the above screenshot of Deuteronomy 8:3. It is an interlinear Greek-English Bible.)