Last week I went to Atlanta Fest, which is a multi-day festival of Christian music. I went for the purpose of relaxing for a few days while listening to some of my favorite bands play, including Switchfoot, Casting Crowns, Tenth Avenue North, Reilly, Sanctus Real, Seventh Day Slumber and Disciple. I heard those bands play, I enjoyed the music and had a very good time. I'm very thankful for concerts like this. A lot of people put a lot of effort into that event each year, and it is by far the best festival that I know of. But I experienced more than just the music, something which was unexpected.

Last week I went to Atlanta Fest, which is a multi-day festival of Christian music. I went for the purpose of relaxing for a few days while listening to some of my favorite bands play, including Switchfoot, Casting Crowns, Tenth Avenue North, Reilly, Sanctus Real, Seventh Day Slumber and Disciple. I heard those bands play, I enjoyed the music and had a very good time. I'm very thankful for concerts like this. A lot of people put a lot of effort into that event each year, and it is by far the best festival that I know of. But I experienced more than just the music, something which was unexpected.

You see each day they have at least one speaker offer an invitation to come to Jesus Christ and receive salvation. This is, in and of itself, a wonderful idea -- one that I wholeheartedly support. The problem is that the speakers only preached part of the gospel as though it were the whole gospel. They preached John 3:16 and Rom. 10:13. Here's what these verses say:

For God so loved the world that He gave His only begotten Son, that whoever believes in Him should not perish but have everlasting life.
(John 3:16) 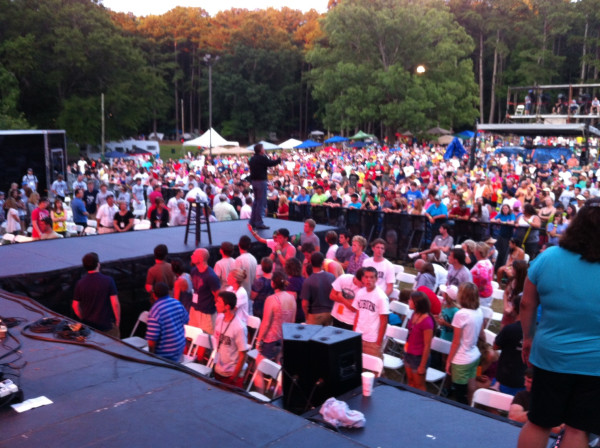 The speaker would then lead all who were willing in a prayer inviting Jesus into their heart to be their Lord and Savior, after which they were pronounced "saved". Day after day, many went forward to respond to the message. And there was much rejoicing. The atmosphere was electric and festive, rejoicing in GOD and in Jesus.

Going into the event I knew this much was going to happen. I knew there would be speakers present, that they would preach faith and confession of Jesus as Lord as all one must do to be saved, and that many would be deceived. What I didn't expect, however, was for this to place such a heavy burden upon my heart. I found it extremely difficult at the time, often impossible, to rejoice in my personal relationship with GOD and to get lost in the music, which had been my plan (because rarely have I found the songs to be less than 100% truth).

Rather, my heart was broken because, if I understand the scriptures correctly, many of these people are not actually saved. The truth is that GOD has more to say regarding how we come to Jesus than just two verses. We can't simply snip two verses from GOD's word dealing with salvation and discard the rest of what He says on the subject. We must keep reading and follow all of what GOD says.

There are numerous passages I could reference, but let me give you just one example to illustrate my point. The apostle Paul penned the words of Rom. 10:13 (by inspiration of the Holy Spirit). Yet what did he say about his own salvation experience? Before Paul the apostle he was Saul of Tarsus, a man who persecuted Christians and wreaked havoc on the church. He was on his way to Damascus to persecute (and kill) Christians when Jesus appeared by a bright light to him (Acts 9:1-4). Jesus asked why Saul was persecuting Him and note Saul's reply:

Did Saul believe Jesus is the Son of GOD at this point? Clearly he did. He confessed Jesus as "Lord". Was he saved then? Let's let GOD answer this with His word. Look at Acts 22. Here, years later Paul retells of his encounter with Jesus upon the road and the events which followed:

10 So I said, ‘What shall I do, Lord?’ And the Lord said to me, ‘Arise and go into Damascus, and there you will be told all things which are appointed for you to do.’ 11 And since I could not see for the glory of that light, being led by the hand of those who were with me, I came into Damascus. 12 “Then a certain Ananias, a devout man according to the law, having a good testimony with all the Jews who dwelt there, 13 came to me; and he stood and said to me, ‘Brother Saul, receive your sight.’ And at that same hour I looked up at him. 14 Then he said, ‘The God of our fathers has chosen you that you should know His will, and see the Just One, and hear the voice of His mouth. 15 For you will be His witness to all men of what you have seen and heard. 16 And now why are you waiting? Arise and be baptized, and wash away your sins, calling on the name of the Lord.’
(Acts 22:10-16)

Clearly Acts 22:16 shows that Saul did not arrive in Damascus having been forgiven of his sins. That's because simply having faith and confessing Jesus as Lord does not save. Are John 3:16 and Rom. 10:13 true? You bet. But they aren't all that's involved. It is in the water of baptism -- a word which means immersion (covered up) -- that the blood of Jesus washes our sins away. I wish everybody who believes Jesus is GOD's Son and invited Him to be their Savior were truly saved. I don't want anyone to die and go to hell...NO ONE. This is why it was so sad to sit amongst thousands of people who might not realized that GOD said more than just "believe". I pray for people everywhere that they might see the truth about salvation and receive forgiveness. That's why I'm writing this.

Each of us is responsible for our personal, individual relationship with GOD (Phil. 2:12-13). I will stand in judgment before GOD for me (only). You will stand for you (only). No one -- not your parents, your siblings, your spouse, not even your pastor -- will stand with you before GOD. Therefore it is up to you and I to individually study GOD's word. This question is too important to rely on what I or anyone else, including and ESPECIALLY your pastor, believes the Bible teaches. READ IT FOR YOURSELF! Please, I'm begging you. Don't risk eternity in hell by refusing to obey the full gospel of Jesus Christ. Be baptized for the forgiveness of your sins!

For more verses you can read regarding salvation, read Life's Most Important Question. I love you -- even if I don't know you -- because GOD loves you and I love Him (1 John 4:20-21)! Don't be lost; don't be deceived.