Our Trip to AtlantaFest 2014 - Highlights (continued)

Our second favorite performance was easily Thousand Foot Krutch. Although they didn't headline the festival, they were absolutely the best performance on Thursday. Unfortunately, just before TFK played, I had to make an abrupt trip to the facilities as some Shane's Rib Shack pulled pork nachos with jalapeños I had eaten about an hour beforehand did not sit well on my stomach. In fact, I was pretty much sick all night Thursday night—a most unpleasant experience. I'll probably never eat BBQ nachos again. Thankfully, I was able to recover well enough to catch the last two-thirds of TFK's set from the field as opposed to listening from the restroom. However, we only captured a handful of photos from TFK's set.

I'll say more about this later, but TFK excelled at bringing the audience to life, something that seemed unusually difficult at this particular festival. There was a very high energy level during their performance. Lastly, I thought their setlist was good, mixing in some old tracks with newer stuff.

Prior to AtlantaFest 2014, I had not been a huge Matthew West fan. I have always admired and appreciated his songs' messages, however, and was excited to see him perform. He was excellent—very personable, walking around in the crowd, even eating some Cheetos from a little girl. And, as anticipated, Matthew's performance brought a deeper understanding of several of his songs. This was a highlight of the week for me. Matthew showed us shorter versions of the following two video clips and talked about some additional details.

Hello My Name Is

Who couldn't be touched by these beautiful songs and the stories that inspired them? Kudos to Matthew West for pursuing the idea of telling others' stories and reflecting the glory to GOD. I don't know Matthew, I've never met him, but I imagine he is quite the humble guy. His humility and love of people shine through and I'm thankful for what he's doing with the musical gifts GOD has given him. 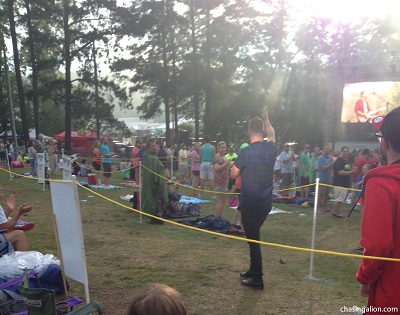 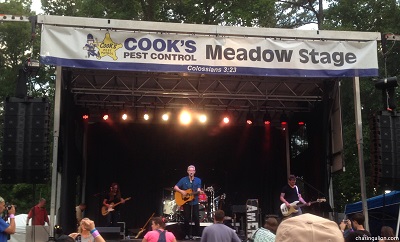 Matt Maher was the first headline performer of the festival and he did a fantastic job. Matt was very effective at boosting the crowd's energy level and participation. He came across very transparent both with the things he said and the message within his songs. Going into the festival, Holly said she wasn't very excited about hearing Matt Maher because she didn't know any of his songs. I told her I was looking forward to his set and that she would recognize some of his songs once he played them. Sure enough, both of us knew all but about one or two of the songs Matt played.

In case you aren't familiar with Matt's music, here are a few of his hits.

Lord, I Need You

All The People Said Amen

Every time we go to a concert, we're looking to "discover" some new artists to add to our music collection and follow going forward. For us, this year, two previously-unknown artists stood out.

Love and The Outcome

The Canadian husband and wife duet of Love and The Outcome was a major highlight for Holly and me. They had a cool story and a great set. Both were in separate bands prior to their beginning dating. As best as I can recall, they said that after they married, they gave up their role in their respective bands and decided to form their own group. The name Love and The Outcome was a combination of parts of their individual groups. They wanted to get Love and The Outcome started so they took a leap of faith, sold everything they had—except his guitar and her Kitchen Aid mixer, they said—and for a period of time they lived out of their Volkswagen Jetta.

In case you are unfamiliar, here's a video of their most popular song, "He Is With Us."

The other "new" band that we really enjoyed is also from Canada: The Royal Royal. They were pretty unique among the performers in that they were very scaled down. The band is comprised of two brothers and one of them sang and the other played the guitar and sang backup. The music purist in me appreciated their "no frills" approach. Even though their music was pretty mello and the crowd was fairly sparse (they played earlier in the day before lots of people arrived), I think they really connected with people. I know we really liked their performance.

While this picture is by no means award-winning, I liked how it captured the simplicity of their performance. All the other equipment on stage was covered up due to rain in the area and forecast.

Red headlined on Thursday night. I really like some of their music and they are a fun band to rock out to live. This was the third time we've seen Red in concert. Honestly, I was a little disappointed in their performance and I'm not entirely sure why. The crowd didn't seem all that into it for some reason. The lead guitarist and lead singer kept bumping into each other on the front of the "runway," which added some comedy to the night. Despite our feelings of it being a subpar performance, Red is still good enough to make my highlights list. 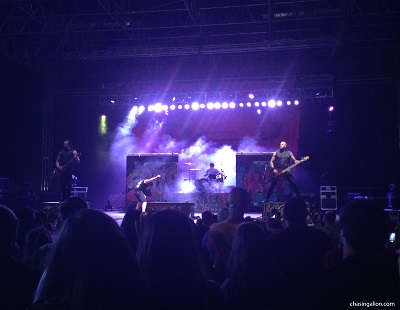 This next one captures my sentiments fairly well. 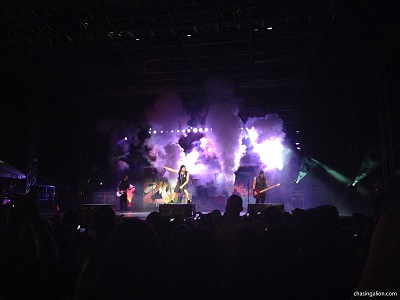 One pleasant surprise from this year was that many of the speakers had what I consider to be more substance to their message. There was the expected—and appropriate—mentioning of GOD's love, mercy, grace, forgiveness and salvation. But there were also calls to repentance, forgive others, cease living like the world, and mentions of the cost (along with the rewards) of discipleship. Some speakers really taught some stuff. This perceived difference was welcome and certainly substantial Scriptural messages are much needed among believers.

Unfortunately, not everything about the AtlantaFest 2014 messages should be praised. I'll say more about this later.

One of my favorite things about "Christian" concerts is that the atmosphere is so much different than "mainstream" events. From the ticket booth, to security checks, to vendors, to fellow attendees, to the speakers and even the bands, everything feels so much more relaxed and "as it should be." It's common for people sitting and standing nearby to strike up conversations. Friendliness is the norm rather than the exception. And while bands are given what I consider a proper, welcoming introduction, the artists themselves and those that introduce them make what appears to be a genuine, sincere effort to reflect glory to GOD. This is a welcome contrast from many mainstream artists which seem to revel and even solicit worship from their fans. Yes, I enjoy this difference very much.

It is common for individual band members to walk around anonymously among the crowd or back and forth to the sound booth throughout the festival. Artists often make themselves available for pre- or post-set meet-and-greets, autographs, photo opportunities, etc. Some even actively solicit people to come visit them at their merchant booth. People there are so accessible and it is really appreciated.