AtlantaFest is an annual "Christian music festival" held in mid-June at Stone Mountain, GA. This year, Holly and I attended for our third time. In 2010, we went for one day of the festival to see one of our favorite bands, Tenth Avenue North, perform. In 2011, we attended three of the four days. The lineup that year was outstanding with Switchfoot, Sanctus Real, Seventh Day Slumber, Disciple, Casting Crowns and Reilly—one of our favorite less-well-known bands—all playing, among many others.

We took a break for the past two years as the lineup wasn’t compelling enough for us to attend. And in 2014, we returned, attending Wednesday through Friday. This year’s lineup included Switchfoot, Red, Thousand Foot Krutch (TFK), Matthew West, Rush of Fools and Matt Maher. We were excited about the festival this year and it did not disappoint.

There were numerous things to like about this year's festival. Here are some of my top highlights.

This was the first time the festival used a second stage in the main field area (see the map below). In years past, less-well-known bands played under a covered pavillion which was probably about 3/4 of a mile from the main field area. The dual stage setup was clearly better for festival attendees due to less back-and-forth travel and more comfortable seating (the pavillion only had park benches available), as well as for the artists as their attendance was significantly greater than with the previous setup. 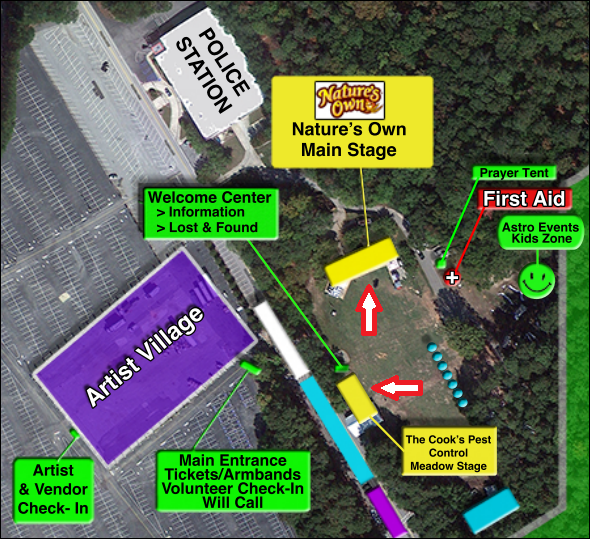 Here's a shot of the smaller second stage. Notice the ropes lining off sections of the field. I'll talk more about this later. (Click the photos to open a full-size image.) 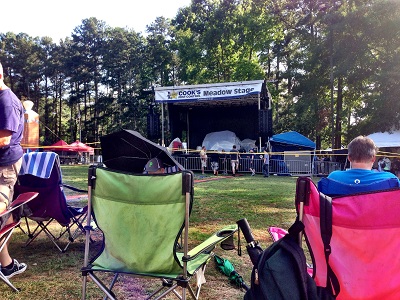 Another side benefit of the second stage was that it enabled some timing changes which we really appreciated. For example, in years past, the less-well-known artists would begin performing at the "back 40" pavillion at 10:00 AM, continuing until about 3:00 PM. This year, however, artists began performing at 2:00 PM and alternated between the two stages throughout the evening. This gave attendees plenty of time to take care of morning activities such as running errands, getting breakfast or visiting Stone Mountain park prior to the festival activities beginning. Then, once the festival started, it was essentially non-stop action until 10:30 or 11:00 PM. These changes were great and I hope they stick with them in future years.

Without question, Switchfoot was our favorite artist performance of the week. In fact, I don't know that we would have attended had Switchfoot not been playing. This was our fourth time to see Switchfoot in concert and they simply get better every time. When we were last at AtlantaFest in 2011, Switchfoot played the first night of the festival. Unfortunately, their set got cut short due to a serious thunderstorm that wouldn't go away. At first, when it was just raining monsooning, Switchfoot kept playing and we all stood there under our umbrellas getting drenched. But then, when the lightning started, they shut it down.

By the way, if you haven't seen this video I shot of "Meant to Live," it'll give you an idea of the crazy weather we had that night.

This year, I decided to just enjoy the show instead of recording video. Holly and I did snap a number of pictures, though. Here's some of my favorites. 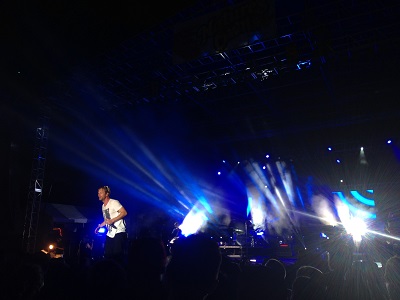 I like this next one, despite being a bit blurry, because it somewhat captures Jon Foreman's contagious smile and frequent crowd interaction. The sunglasses on his head belonged to someone in the first row. At one point, Jon walked out on top of the crowd as he sang one of the songs. As he made his way back to the stage, he passed within arm's reach of us. Switchfoot excels at creating crowd participation and engagement. It's always apparent that they are having fun and really want to be there with you sharing those moments together. 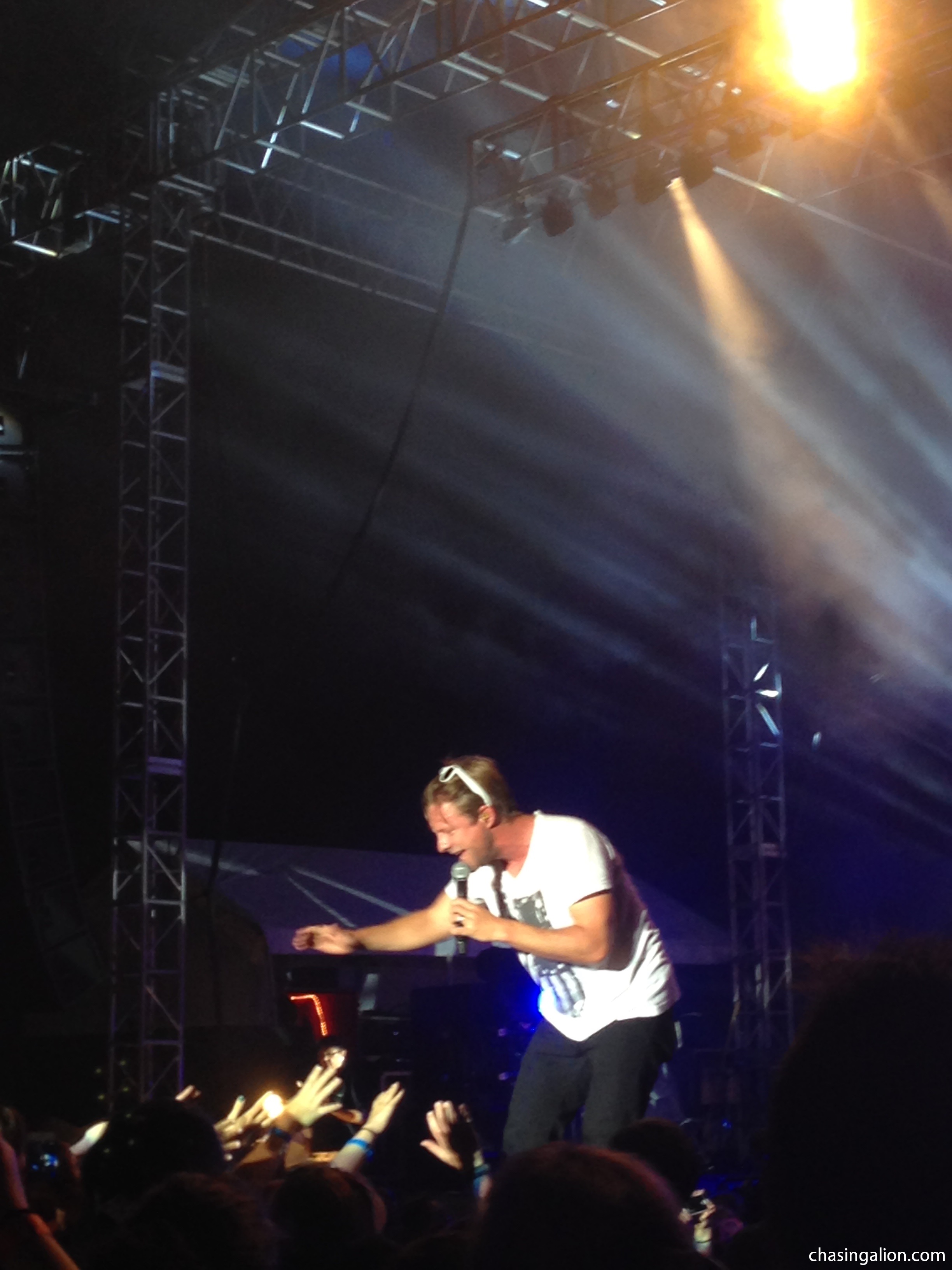 Definitely the highlight of their excellent performance was Switchfoot playing "Where I Belong," which is my absolute favorite Switchfoot song. Prior to playing the song, Jon saw a fan's flag which he apparently asked the fan if he could have. He held the flag throughout the song and as the band took their customary post-performance bow, they held the flag in front of them. That was a pretty special moment. 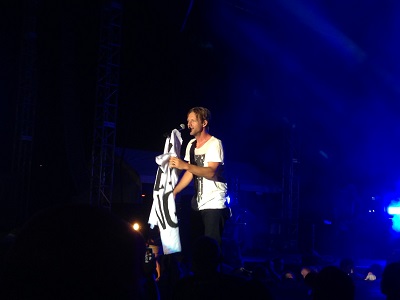 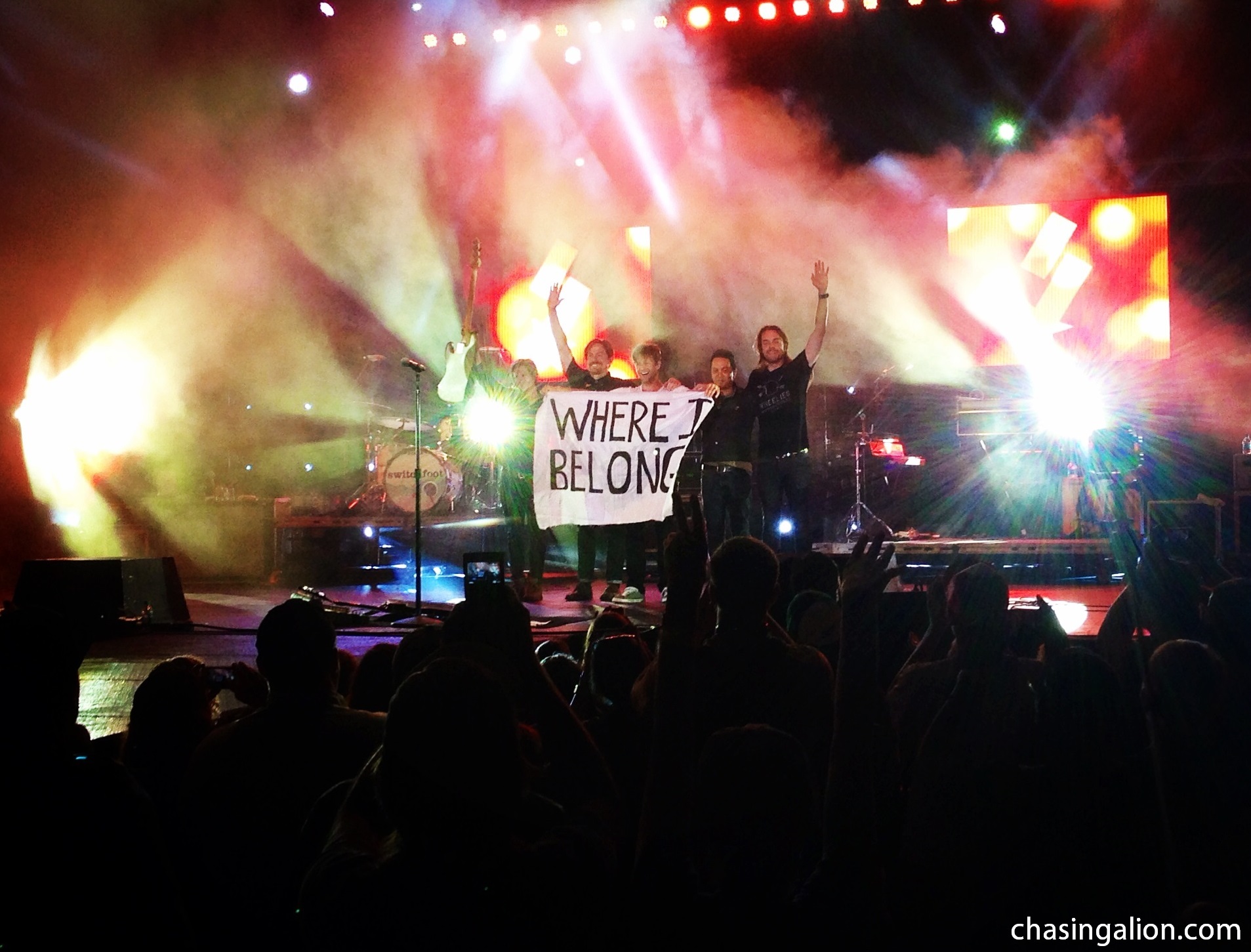 We're so thankful to Switchfoot for the great time and memories over the years. In 2011, as their performance was being cut short, Jon promised they would be back and he honored that promise in just three years.