How Often Should we Have Communion? (Lord's Supper Frequency) 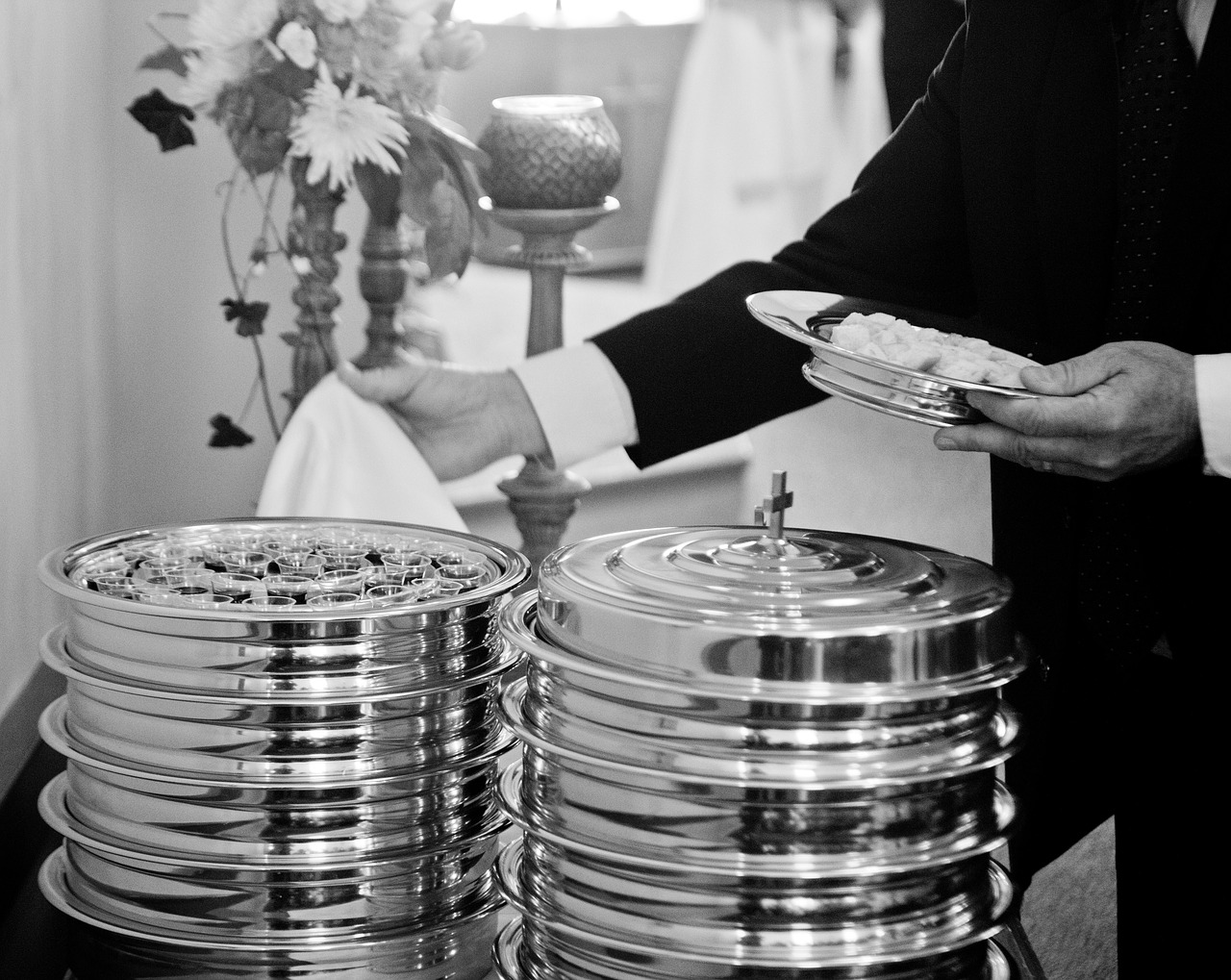 How often should Christians observe the Lord's Supper?

Let's examine the Scriptures and also look at some insight from other early Christian writers regarding what they did.

Probably the best starting point for examining the Scriptures on this subject is to look at Acts 20.

For most of my life, I heard it stated that Christians "are commanded" to eat the Lord's Supper every Sunday because of Acts 20:7, which says:

Now on the first day of the week, when the disciples came together to break bread, Paul, ready to depart the next day, spoke to them and continued his message until midnight.

Countless times I've heard it said that the phrase "break bread" in Acts 20:7 referred to the Lord's Supper.

This might be true, but let's take a closer look at the verse in its context:

6 But we sailed away from Philippi after the Days of Unleavened Bread, and in five days joined them at Troas, where we stayed seven days. 7 Now on the first day of the week, when the disciples came together to break bread, Paul, ready to depart the next day, spoke to them and continued his message until midnight. 8 There were many lamps in the upper room where they were gathered together. 9 And in a window sat a certain young man named Eutychus, who was sinking into a deep sleep. He was overcome by sleep; and as Paul continued speaking, he fell down from the third story and was taken up dead. 10 But Paul went down, fell on him, and embracing him said, “Do not trouble yourselves, for his life is in him.” 11 Now when he had come up, had broken bread and eaten, and talked a long while, even till daybreak, he departed. 12 And they brought the young man in alive, and they were not a little comforted.
(Acts 20:6-12 NKJV)

Here are the events described in chronological order:

Now, let's make a few observations from this passage:

What Does the Bible Say Regarding Frequency?

Let's look back at the example of our Lord.

The timing of the Last Supper is an oft-debated subject in its own right. What makes it complicated is the various systems of measuring days, as mentioned above, and what at first appears to be disagreement between John's account and the other gospels.

By the Jewish system of measuring days, Jesus ate the Last Supper (and set up what we call the Lord's Supper) on Wednesday evening, Abib/Nisan 14, which would have been "early" in the 24-hour Jewish day (sunset to sunset).

Does this mean we should eat the Lord's Supper every Wednesday night?

What cannot be denied is that we have the Lord's example of it.

If you conclude as I have regarding Acts 20:7, the only passage which gives us instruction regarding how frequently we should eat the Lord's Supper is 1 Cor. 11.

17 Now in giving these instructions I do not praise you, since you come together not for the better but for the worse. 18 For first of all, when you come together as a church, I hear that there are divisions among you, and in part I believe it. 19 For there must also be factions among you, that those who are approved may be recognized among you. 20 Therefore when you come together in one place, it is not to eat the Lord’s Supper. 21 For in eating, each one takes his own supper ahead of others; and one is hungry and another is drunk. 22 What! Do you not have houses to eat and drink in? Or do you despise the church of God and shame those who have nothing? What shall I say to you? Shall I praise you in this? I do not praise you.

23 For I received from the Lord that which I also delivered to you: that the Lord Jesus on the same night in which He was betrayed took bread; 24 and when He had given thanks, He broke it and said, “Take, eat; this is My body which is broken for you; do this in remembrance of Me.” 25 In the same manner He also took the cup after supper, saying, “This cup is the new covenant in My blood. This do, as often as you drink it, in remembrance of Me.” 26 For as often as you eat this bread and drink this cup, you proclaim the Lord’s death till He comes.
(1 Cor. 11:17-26 NKJV)

The NT doesn't command us how frequently to eat the Lord's Supper.

Now, with that said, what does that verse say is the result of their eating the Lord's Supper? They proclaimed the Lord's death.

My thinking is, "Would it not be better to proclaim the Lord's death more frequently than less?"

One thing that is clear from 1 Cor. 11 is that the Lord's Supper was intended to be eaten as a congregation—thus the Holy Spirit's references to "when you come together..."

When we combine Acts 20:7-11, 1 Cor. 16:1-2, and extra-biblical history it seems clear that the first century Christians assembled on Sundays, and therefore Sunday was (and is) a logical time for Christians to eat the Lord's Supper.

In Acts 2:42-47, Luke writes about the earliest Christians:

42 And they continued steadfastly in the apostles’ doctrine and fellowship, in the breaking of bread, and in prayers. 43 Then fear came upon every soul, and many wonders and signs were done through the apostles. 44 Now all who believed were together, and had all things in common, 45 and sold their possessions and goods, and divided them among all, as anyone had need. 46 So continuing daily with one accord in the temple, and breaking bread from house to house, they ate their food with gladness and simplicity of heart, 47 praising God and having favor with all the people. And the Lord added to the church daily those who were being saved.

Similar to Acts 20, there are many who believe that Acts 2:42 is referring to the Lord's Supper when it uses the phrase "breaking of bread."

Again, this might be true but we cannot prove it one way or another. Again, similar to Acts 20, we find a second reference to food in 2:46. Interestingly, this word "food" can literally be translated "meat."

In the context of Lord's Supper frequency, what is interesting about Acts 2:42-46 is that the brethren were together daily and they ate together daily.

It is my belief, based on the context, that Acts 2:42 and Acts 2:46 are referring to the same event. I say this primarily because no distinction is made between the two references to bread/food.

If you agree, and if Acts 2:42 is referring to the Lord's Supper, then the early Christians observed it daily.

How Frequently Did the Early Christians Eat the Lord's Supper?

Given how little the Bible says regarding the frequency of the Lord's Supper observance, the next best thing we can do is look at the writings of the early Christians to see what insight we can gain from their practice.

After all, these writings are the best link we have to the practices of the post-NT early church.

(We must, of course, remember that these writings were uninspired and should not be given equal weight as Scripture.)

"In many places and by many Christians [the Eucharist] was celebrated even daily, after apostolic precedent, and according to the very common mystical interpretation of the fourth petition of the Lord's prayer—'Give us this day our daily bread'". (Ante-nicene Christianity: History Of The Christian Church by Philip Schaff, p.207, linked here)

"Thou shalt seek out every day the faces of the saints, either by word examining them, and going to exhort them, and meditating how to save a soul by the word, or by thy hands thou shalt labour for the edemption of thy sins." (Barnabas, c. 70-130 AD; http://www.ccel.org/ccel/schaff/anf01.txt)

"Take heed, then, often to come together to give thanks to God, and show forth His praise. For when ye come frequently together in the same place, the powers of Satan are destroyed, and his "fiery darts" urging to sin fall back ineffectual." (Didache, c. 80-140 AD; http://www.ccel.org/ccel/schaff/anf01.txt)

"Having ended the prayers, we greet one another with a kiss. Then there is brought to the president of the brethren bread and a cup of wine mixed with water. He takes them and gives praise and glory to the Father of the universe. . . . And when the president has given thanks, and all the people have expressed their assent, those whom we call deacons give to each of those present the bread and wine mixed with water over which the thanksgiving was pronounced, to partake of. And they carry away a portion to those who are absent. And this food is called among us the Eucharist [Thanksgiving]. And no one is allowed to partake of it but the one who believes that the things which we teach are true, and who has been washed with the washing that is for the remission of sins, and unto regeneration, and who is living as Christ has commanded. . . .

"And on the day called Sunday, all who live in cities or in the country gather together to one place, and the memoirs of the apostles or the writings of the prophets are read, as long as time permits; then, when the reader has ceased, the president verbally instructs, and exhorts to the imitation of these good things. Then we all rise together and pray, and, as we before said, when our prayer is ended, bread and wine and water are brought, and the president in like manner offers prayers and thanksgivings, according to his ability, and the people assent, saying Amen; and there is a distribution to each, and a participation of that over which thanks have been given, and to those who are absent a portion is sent by the deacons." (Justin Martyr, c. 160 AD; http://www.ccel.org/ccel/schaff/anf01.txt)

It is important that we remember our Lord's death in accordance with His will.

As such, we must be diligent to study and rightly divide His word in order to properly obey Him.

Equally important is that we do not bind on others those things which GOD Himself has not bound upon us. This is what the first century Jewish religious leaders were guilty of doing (see Matt. 15:8-9).

From my study I believe it is perfectly acceptable for a church to observe the Lord's Supper each Sunday. There is sufficient evidence to suggest the early Christians assembled on Sunday and therefore it makes sense to celebrate our LORD's sacrifice while we are together on that day. This is the practice of the congregation with which I assemble.

However, I also conclude that 1 Cor. 11:26 authorizes groups of Christians to eat the Lord's Supper on other days of the week. Given that there is no command or clear instruction in the NT to eat each Sunday, we should not condemn those who do otherwise. After all, there is strong evidence that even daily observance was the practice of the early church.