The Law of Swinging Pendulums 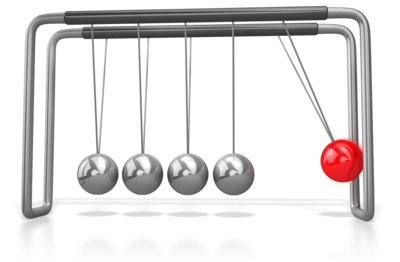 Over the years I've observed a human tendency that I think out to be a law (as in Newton's First Law of Motion or Moore's Law dealing with computer hardware):

Virtually every element of human behavior is in constant flux between extremes.

There's probably a better way to word it, but the point is that we seem to be constantly swinging from one extreme to the opposite, individually and in all forms of organization (families, governments, corporations, schools, churches, etc.)

There are numerous examples of this phenomenon.

I could go on and on, but you get the point.

Sometimes these extreme changes are improvements in morality or spirituality.

Other times they are regressions.

Other times they aren't inherently right or wrong, just different.

But often the optimal situation is found not in the extremes, but right in the middle—in between.

Like the examples above, this applies individually as well as to groups of people. Let me illustrate:

In his present condition, Jack is at one extreme of the pendulum—absolutely no sense of self-worth, perhaps battling depression or suicidal thoughts.

What's at the opposite extreme of this pendulum?

Arrogance—a person who thinks of themselves more highly than they should.

Where is it most healthy for Jack to be?

Neither extreme is good; Jack needs to be in the middle.

He needs to know that he is valuable as a human being created in the image of GOD, with a soul that was worth Jesus dying to save, but not more valuable than the next person.

Next, consider the Perkins family.

They've fallen into the habit of not spending any time together as a family.

Everyone is constantly busy living their lives. Dad has his job. Mom is taking care of chores around the house and other activities. Junior is playing baseball and video games. And the daughter is on the phone and on the computer in the evenings.

The opposite extreme might be where they spend every single minute together, constantly involved in family activities to the exclusion of any individual hobbies or activities.

Neither extreme is optimal. Again, there's a happy middle ground.

There are innumerable spiritual applications of this "law" as well.

At one extreme grace is never thought about or discussed while obedience is constantly preached.

This leads to legalistic law-keeping, spiritual depression at the realization that we can never "measure up" to the standard of Jesus' perfection, and a lack of joy because salvation feels unattainable.

At the other extreme is a belief that there is nothing I can do to fall out of GOD's grace and that, the more I sin, the more grace abounds, therefore my sin no longer matters to GOD.

At this extreme, grace is constantly emphasized while obedience and holiness are never discussed.

Neither extreme is accurate or healthy.

Rather, we need to equally emphasize obedience, holy living and grace which covers over our inability to live perfectly. Joy, peace and fellowship with GOD is found when the pendulum of grace is properly balanced in the middle.

So what's the point here?

Life is absolutely filled with these pendulums, therefore it takes frequent self-examination to identify aspects where we've fallen prey to unhealthy extremism.

If we improve our individual awareness that this human tendency exists, then we can guard against getting out of balance. When we do that, life will be a lot better, a lot more healthy.

There's a lot of truth to the old saying, "Everything in moderation."