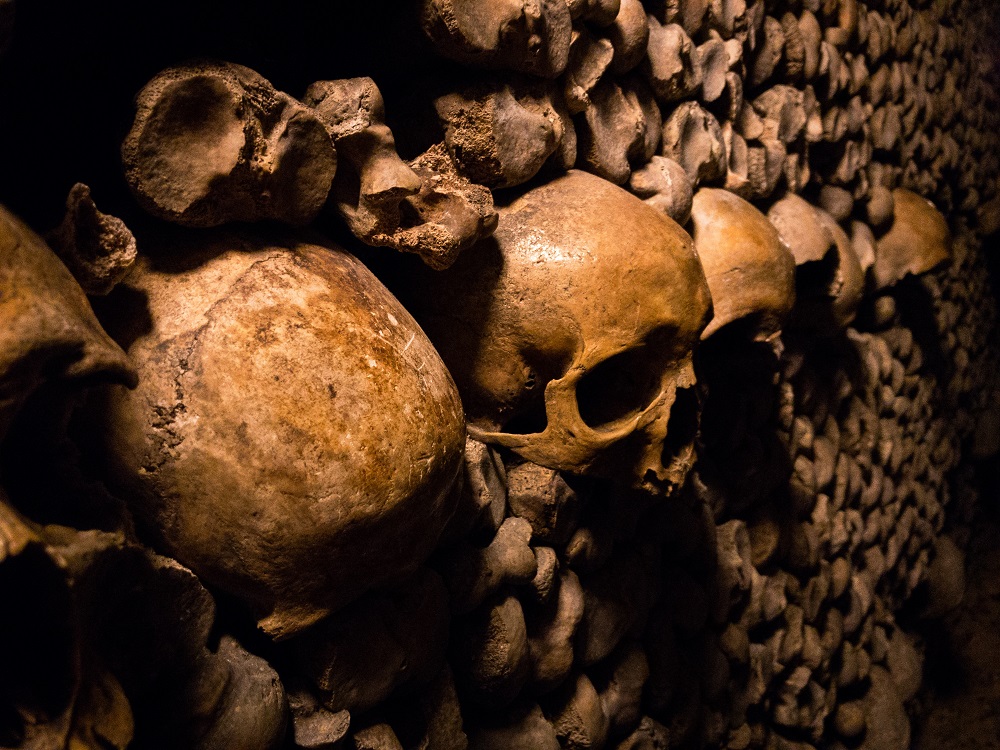 No, Jesus is very much alive today.

In the months leading up to His crucifixion, Jesus repeatedly foretold what would happen—that He would be betrayed into the hands of the Jewish religious leaders, that He would die and that He would arise from the grave after three days and three nights.

From that time on Jesus began to explain to his disciples that he must go to Jerusalem and suffer many things at the hands of the elders, the chief priests and the teachers of the law, and that he must be killed and on the third day be raised to life.
(Matt. 16:21 NIV)

38 Then some of the Pharisees and teachers of the law said to him, “Teacher, we want to see a sign from you.”

The Jewish religious leaders who had Jesus crucified were familiar with Jesus' claims that He would be raised after three days in the grave, so when Jesus died upon the cross, they went to the Roman governor, Pilate, and asked for extra protection against Jesus' disciples from sneaking Jesus' corpse away.

So they made it humanly impossible.

57 As evening approached, there came a rich man from Arimathea, named Joseph, who had himself become a disciple of Jesus. 58 Going to Pilate, he asked for Jesus’ body, and Pilate ordered that it be given to him. 59 Joseph took the body, wrapped it in a clean linen cloth, 60 and placed it in his own new tomb that he had cut out of the rock. He rolled a big stone in front of the entrance to the tomb and went away. 61 Mary Magdalene and the other Mary were sitting there opposite the tomb.

62 The next day, the one after Preparation Day, the chief priests and the Pharisees went to Pilate. 63 “Sir,” they said, “we remember that while he was still alive that deceiver said, ‘After three days I will rise again.’ 64 So give the order for the tomb to be made secure until the third day. Otherwise, his disciples may come and steal the body and tell the people that he has been raised from the dead. This last deception will be worse than the first.”

But human efforts will never overpower the will (and Word) of GOD.

The four gospel accounts each testify to Jesus' resurrection.

1 After the Sabbath, at dawn on the first day of the week, Mary Magdalene and the other Mary went to look at the tomb.

2 There was a violent earthquake, for an angel of the Lord came down from heaven and, going to the tomb, rolled back the stone and sat on it. 3 His appearance was like lightning, and his clothes were white as snow. 4 The guards were so afraid of him that they shook and became like dead men.

5 The angel said to the women, “Do not be afraid, for I know that you are looking for Jesus, who was crucified. 6 He is not here; he has risen, just as he said. Come and see the place where he lay. 7 Then go quickly and tell his disciples: ‘He has risen from the dead and is going ahead of you into Galilee. There you will see him.’ Now I have told you.”
(Matt. 28:1-7 NIV)

1 On the first day of the week, very early in the morning, the women took the spices they had prepared and went to the tomb. 2 They found the stone rolled away from the tomb, 3 but when they entered, they did not find the body of the Lord Jesus. 4 While they were wondering about this, suddenly two men in clothes that gleamed like lightning stood beside them. 5 In their fright the women bowed down with their faces to the ground, but the men said to them, “Why do you look for the living among the dead? 6 He is not here; he has risen! Remember how he told you, while he was still with you in Galilee: 7 ‘The Son of Man must be delivered over to the hands of sinners, be crucified and on the third day be raised again.’ ” 8 Then they remembered his words.

9 When they came back from the tomb, they told all these things to the Eleven and to all the others. 10 It was Mary Magdalene, Joanna, Mary the mother of James, and the others with them who told this to the apostles. 11 But they did not believe the women, because their words seemed to them like nonsense. 12 Peter, however, got up and ran to the tomb. Bending over, he saw the strips of linen lying by themselves, and he went away, wondering to himself what had happened.
(Luke 24:1-12 NIV)

1 Early on the first day of the week, while it was still dark, Mary Magdalene went to the tomb and saw that the stone had been removed from the entrance. 2 So she came running to Simon Peter and the other disciple, the one Jesus loved, and said, “They have taken the Lord out of the tomb, and we don’t know where they have put him!”

3 So Peter and the other disciple started for the tomb. 4 Both were running, but the other disciple outran Peter and reached the tomb first. 5 He bent over and looked in at the strips of linen lying there but did not go in. 6 Then Simon Peter came along behind him and went straight into the tomb. He saw the strips of linen lying there, 7 as well as the cloth that had been wrapped around Jesus’ head. The cloth was still lying in its place, separate from the linen. 8 Finally the other disciple, who had reached the tomb first, also went inside. He saw and believed. 9 (They still did not understand from Scripture that Jesus had to rise from the dead.) 10 Then the disciples went back to where they were staying.

11 Now Mary stood outside the tomb crying. As she wept, she bent over to look into the tomb 12 and saw two angels in white, seated where Jesus’ body had been, one at the head and the other at the foot.

“They have taken my Lord away,” she said, “and I don’t know where they have put him.” 14 At this, she turned around and saw Jesus standing there, but she did not realize that it was Jesus.

Thinking he was the gardener, she said, “Sir, if you have carried him away, tell me where you have put him, and I will get him.”

She turned toward him and cried out in Aramaic, “Rabboni!” (which means “Teacher”).

17 Jesus said, “Do not hold on to me, for I have not yet ascended to the Father. Go instead to my brothers and tell them, ‘I am ascending to my Father and your Father, to my God and your God.’”

18 Mary Magdalene went to the disciples with the news: “I have seen the Lord!” And she told them that he had said these things to her.

19 On the evening of that first day of the week, when the disciples were together, with the doors locked for fear of the Jewish leaders, Jesus came and stood among them and said, “Peace be with you!” 20 After he said this, he showed them his hands and side. The disciples were overjoyed when they saw the Lord.

21 Again Jesus said, “Peace be with you! As the Father has sent me, I am sending you.” 22 And with that he breathed on them and said, “Receive the Holy Spirit. 23 If you forgive anyone’s sins, their sins are forgiven; if you do not forgive them, they are not forgiven.”

24 Now Thomas (also known as Didymus), one of the Twelve, was not with the disciples when Jesus came. 25 So the other disciples told him, “We have seen the Lord!”

But he said to them, “Unless I see the nail marks in his hands and put my finger where the nails were, and put my hand into his side, I will not believe.”

26 A week later his disciples were in the house again, and Thomas was with them. Though the doors were locked, Jesus came and stood among them and said, “Peace be with you!” 27 Then he said to Thomas, “Put your finger here; see my hands. Reach out your hand and put it into my side. Stop doubting and believe.”

29 Then Jesus told him, “Because you have seen me, you have believed; blessed are those who have not seen and yet have believed.”
(John 20:1-29 NIV)

Later, the apostle Paul—before he became a Christian, when he was persecuting and killing Christians—testified to being confronted by Jesus in the form of a blinding light upon the road to Damascus.

Similarly, a Christian named Ananias was sent by GOD to inform Paul what he must do to be forgiven of his sins.

2 When they heard him speak to them in Aramaic, they became very quiet.

Then Paul said: 3 “I am a Jew, born in Tarsus of Cilicia, but brought up in this city. I studied under Gamaliel and was thoroughly trained in the law of our ancestors. I was just as zealous for God as any of you are today. 4 I persecuted the followers of this Way to their death, arresting both men and women and throwing them into prison, 5 as the high priest and all the Council can themselves testify. I even obtained letters from them to their associates in Damascus, and went there to bring these people as prisoners to Jerusalem to be punished.

6 “About noon as I came near Damascus, suddenly a bright light from heaven flashed around me. 7 I fell to the ground and heard a voice say to me, ‘Saul! Saul! Why do you persecute me?’

“ ‘I am Jesus of Nazareth, whom you are persecuting,’ he replied. 9 My companions saw the light, but they did not understand the voice of him who was speaking to me.

“ ‘Get up,’ the Lord said, ‘and go into Damascus. There you will be told all that you have been assigned to do.’ 11 My companions led me by the hand into Damascus, because the brilliance of the light had blinded me.

12 “A man named Ananias came to see me. He was a devout observer of the law and highly respected by all the Jews living there. 13 He stood beside me and said, ‘Brother Saul, receive your sight!’ And at that very moment I was able to see him.

14 “Then he said: ‘The God of our ancestors has chosen you to know his will and to see the Righteous One and to hear words from his mouth. 15 You will be his witness to all people of what you have seen and heard. 16 And now what are you waiting for? Get up, be baptized and wash your sins away, calling on his name.’
(Acts 22:2-16 NIV)

Paul wrote to the Corinthian Christians that Jesus had appeared to 500 brethren at one time after the resurrection.

Lastly, and for me personally, most important, is that despite the best efforts of so many who were opposed to the cause of Jesus and to Him as being the Messiah, nobody has found the bones of Jesus.

With so much focus and attention on Jesus' claims prior to His death that he would be resurrected, if He were a fraud and His bones remained on the earth, it would have been discovered long before now.

So yeah, I'm convinced, Jesus is alive. The evidence is overwhelming.