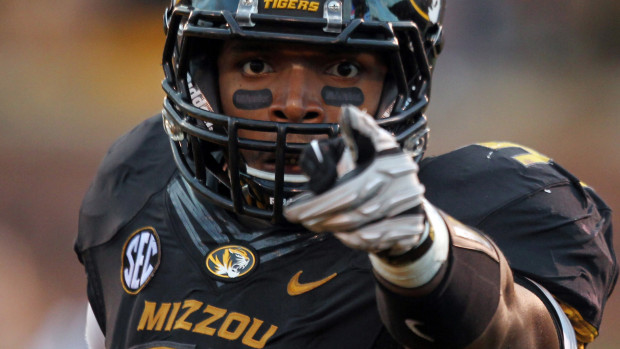 If I could see what was trending on my personal Twitter timeline over the past 24 hours, I know what would be at the top: Michael Sam.

Sam is a former standout football player for the Missouri Tigers who is entering the 2014 NFL Draft and last night announced to the world that he's gay.

If drafted, Sam would be the first openly gay football player in the NFL.

Judging by the volume of tweets I received, lots of people have a lot to say about this situation. After significant introspection, I too have some things to say.

Homosexuality is a sin

The focus of what I have to say here is not about the sin of homosexuality.

In the Bible, GOD has been quite clear on this matter.

There is no room for debate.

Lest anyone have doubt, consider these Scriptures:

9 We also know that the law is made not for the righteous but for lawbreakers and rebels, the ungodly and sinful, the unholy and irreligious, for those who kill their fathers or mothers, for murderers, 10 for the sexually immoral, for those practicing homosexuality, for slave traders and liars and perjurers—and for whatever else is contrary to the sound doctrine 11 that conforms to the gospel concerning the glory of the blessed God, which he entrusted to me.
(1 Tim. 1:9-11 NIV)

Most people just do what's popular

Lately—really since Martin Luther King Day (January 20)—I've been thinking a lot about popularity and "the crowd."

Many who quote MLK today would have been among those opposing his efforts in the 1960s.

Because today it is popular in America to praise and laud Dr. King for his efforts, his teachings and his example.

Many who quote Martin Luther King Jr. today would have been among those opposing his efforts in the 1960s. Because _most_ people just do what's popular. Be different—for good. Click to Tweet

Today in America, it is popular to praise and laud self-professed "gay" people, especially when they face perceived challenges to their acceptance because of the culture or occupation they are in.

Frankly, "the crowd" makes me nauseous. I seriously get sick to my stomach thinking about this "popularity effect."

And this queasiness really has nothing to do with Michael Sam or homosexuality.

If many of these individuals had lived fifty or one hundred years ago in the U.S., they wouldn't be praising a man for announcing his homosexuality.

What happened to America?

Why does today's generation of Americans praise individuals who publicly announce their homosexuality whereas our forefathers would be ashamed to even publicly speak of such behavior?

I don't have all the answers, but this I can say confidently:

In life, one should never, ever, ever stand solely on the reasoning of "That's how I've/we've always done it." Tradition alone, for anything in life, is a castle built on sand.

Americans of the past stood upon biblical principles because they feared GOD.

In our prosperity, we developed a proud and self-reliant spirit that led us to twist the Constitution and push GOD out of our homes, our schools, our universities, our government and our workplaces.

Over time, generations of Americans stopped teaching their children the biblical principles upon which traditions, such as "traditional marriage," stand.

The root of our faith in GOD, as a people, rotted away.

The only thing holding up our morals was the hollow shell of tradition.

And that shell is easily toppled.

Don't be part of the crowd of popular opinion.

There is absolute right and wrong, righteousness and sinfulness.

We learn the difference now, or pay the dreadful price in eternity.

I thought highly of his play on the field before this announcement, and I will respect his play afterward.

I enjoyed watching him at Missouri.

But friend, football and sports are not life.

There is an argument to be made that a person is not defined by what they do (i.e., their occupation) but who they are.

And just the same, loving a person (for who they are—a human created in GOD's image) is not the same as accepting their behavior.

Loving a person for who they are is not the same as accepting their behavior. Click to Tweet

If Michael Sam is drafted and makes an NFL roster, his teammates can 100% support him and love him as a person and a fellow team member and still disagree with his homosexual relationships.

A large percentage of the sports media appear to be salivating over the idea that professional athletes—really any athletes—will announce their homosexual tendencies.

It's as if they can't wait to show how supportive and tolerant and enlightened they are when they write glowing articles of support at these individuals' announcements.

They're an example of the crowd—following what's popular, standing on the principles of what seems good in their own eyes...today.

Is Michael Sam courageous (for announcing his homosexuality)?

According to a Google search, "courage" has two definitions:

No doubt Sam will catch a lot of heat and even hatred from some over his announcement.

It may even cost him some opportunities in football.

So in that sense, yes, his actions took courage.

Courage doesn't inherently mean one's actions should be applauded, however.

It takes courage for terrorists to intentionally fly airplanes into buildings or to strap bombs to their chests and detonate them in a crowd, but neither of those actions should be applauded.

What takes real courage is to love people enough that you warn them of the dangers of continuing down a path that GOD has said do not travel, even when you know it may damage friendships.

Your motivation is love, true love.

It is not a sin to be tempted.

Eve was tempted before sin was even in the world.

Being attracted to those of the same sex is not sinful. It takes courage for a person who is tempted by same-sex relationships to admit their struggle and to ask for help in overcoming it.

Every person faces their own temptations. No type of temptation is inherently worse than others; they are just different.

Real courage is seeking help from Christians to overcome your temptations, not pretending they don't exist or making fun of others who are different.

Real courage stands upon the Bible, whether it's popular or not. Real courage is Jesus and imitating His example, temptation-handling and all.