Are You a Real Heretic? (The Best Book I've Read, Besides the Bible) 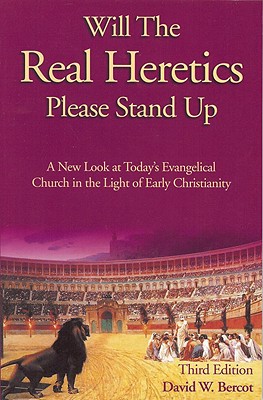 Besides the Bible, what is the number one book you'd recommend someone to read?

For me, it would be Will The Real Heretics Please Stand Up by David W. Bercot.

David Bercot began his professional career in 1980 as an attorney, and he still practices law part time. However, for most of his life, his driving passion has been for Christ. In 1985, to satisfy his theological curiosity, he began reading all of the existing writings of the early Christians (A.D. 100-325). Although his aim at the time was merely for theological inquiry, what he learned about Christianity in the early centuries profoundly affected his entire life. When David shared what he had discovered with various Christian friends, they encouraged him to write a book about how Christianity looked when it was still young.

Bercot eventually followed up on their suggestion, and he wrote the book Will the Real Heretics Please Stand Up, which was published in 1989. That book provides a provocative look at early Christianity in contrast to modern Christianity. Since the book challenges many of the cherished beliefs of evangelicals, Protestants, and Catholics alike, Bercot wasn’t sure what type of response the book would have. To his astonishment, the book sold out of its first printing in six months—and the Heretics book is still in demand over twenty years later.

Years ago, my father-in-law gave me a copy of this book, and it has become a prize possession.

I fully believe that the Bible provides us everything we need to live a godly life and receive salvation (see 2 Tim. 3:14-17).

But the inspired writings of the Bible end in the first century.

As I mentioned in the previous post, the New Testament tells us relatively little about how the early church meetings were conducted (and, thankfully, often leaving room for preference and freedom of choice), as well as many details of early Christian life.

Likewise, if we want to learn how Christendom got from 100 A.D. to where it is today—with thousands of denominations worldwide—we must look beyond the Scriptures.

Most of the people I know who have studied church history at any level do two things:

When we do only these two things, we miss out the goldmine of the writings of the post-New Testament early Christians.

In Will The Real Heretics Please Stand Up, Bercot gives an overview of several of these early Christians, which he defines as living and writing primarily between 90-199 A.D.—men who were personally taught by the apostles and/or peers of the apostles, and an explanation—in their own words—of key doctrines and beliefs that these Christians shared.

There are 19 chapters in the 180-page book and each one is packed with very important information.

If we really want to understand what Christians should be like, other than the inspired writers of the New Testament, who better to look to than those who lived alongside these men and those taught by them?

When you read this book, the logical question that arises (from which the book draws its name), is:

These early Christians' beliefs are so very different than most 'believers' today that they would have been labeled as 'heretics' in modern times. Yet, when we look at the Scriptures and compare these men's beliefs and lives with that of today's 'Christians', who is really the heretic?

Since reading Will The Real Heretics Please Stand Up, I have continued my study of the post-New Testament Christian writings.

Philip Schaff has compiled these writings into a nine-volume set of books called Ante-Nicene Fathers, which you can get via paper or e-book (link to volume 1 from Amazon.com).

You can also access these writings online, including PDF downloadable format, here.

Lastly, Bercot has also published a compilation of excerpts of these writings, grouped topically, called A Dictionary Of Early Christian Beliefs, which is available in print and Kindle format. (They are indexed based on Schaff's compilation.) I have found this a wonderfully helpful resource and I highly recommend it.

I highly encourage any Bible student to read Will The Real Heretics Please Stand Up.

Have you read the book or studied the early Christian writings? What did you think? Did you find it/them insightful?